PJ's BAR-B-QSA hosted a Flag Day Ceremony last Sunday with Public Figures, N.Y.S. Senator Kathleen A. Marchione, and Mayor of Saratoga Springs, Joanne Yepson. This ceremony commemorated a plaque situated on a boulder near the flagpole at PJ's..

The plaque reads, “I believe our flag is more than just cloth and ink. It is a universally recognized symbol that stands for liberty and freedom. It is the history of our nation, and it's marked by the blood of all of those who died defending it." John Thune (R-SD). Below the quote are the words, "In honor of all those who serve and have served in our Armed Forces," followed by the 5 military branch emblems.

Tamara Woolsey Davis and Kayla Sarro opened the ceremony with the singing of our National Anthem, and The Miles-Tone Sisters sang God Bless America.

The ceremony concluded with Allen Moon playing Taps in honor of our fallen heroes.

PJ’s BAR-B-QSA would like to acknowledge the following for their contributions to our ceremony:

William Barton
Donations of flags for each veteran representing their branch of the service, eagle on top of flag pole, new American Flag and Service Branch Flag

Ralph Pascucci and Myriad Productions
For videoing the ceremony 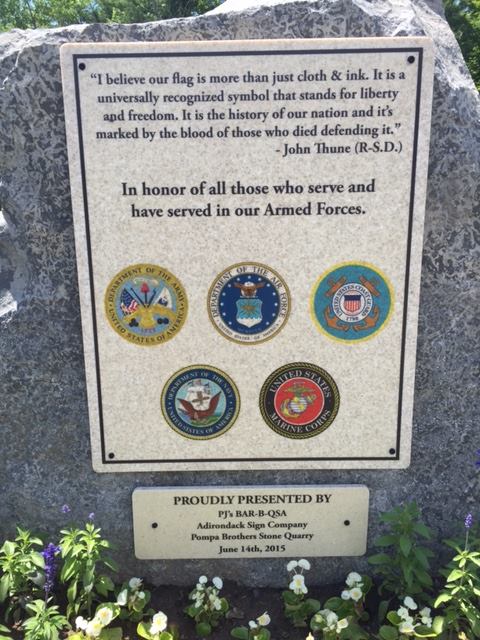